This was a first: every time we have spotted a wild animal or bird in the valley we have told Pablo who says ‘Yes, I’ve seen thousands of those.’ But when we told him about our latest sighting, he was dumbfounded. He has never seen an Egyptian Mongoose, or meloncillo as the Spanish know it. 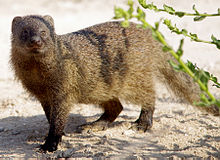 Not native to Spain, the mongoose was introduced to the Iberian Peninsula during the Arab occupation 711 AD through 1492 AD. It is thought the moors introduced the mongoose, and probably the genet cat too, to hunt rats. The mongoose certainly eats snakes. It is a meat-eater – rodents, fish, birds, reptiles, amphibians and insects – as well as fruit and eggs. To crack open an egg, the mongoose throws it between its legs against a rock or wall.

One explanation for the fact that we’ve lived here all this time and have never seen one before, is that they are largely nocturnal. We saw two pups which disappeared rapidly into a bank of romero. They were spotted only once, and it is likely they are living in a rabbit warren. 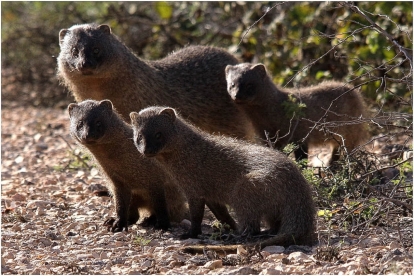 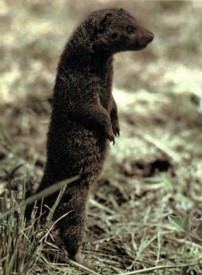 Watch a meloncillo at You Tube. 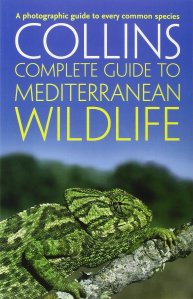 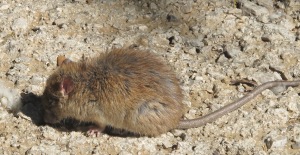 We are lucky enough to welcome a pair of visiting booted eagles to the valley each summer. They are, according to our bird book, an endangered species. We actually refer to them as ‘bootcut’ eagles, after a malapropism by a friend who was thinking about bootcut jeans at the time! 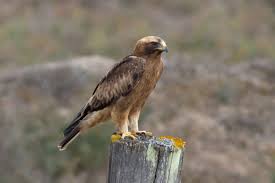 To listen to a Booted Eagle, click here for a fantastic recording by http://www.bird-songs.com.
Click here to read about the birdwatching walks by blogger Birdwatch Gaucin. Gaucin is an Andalucian village, about two hours drive away from our valley. 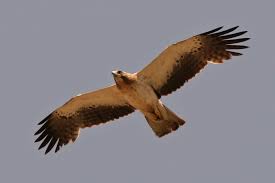 Listen to the song of these other birds we see in our Spanish valley:-
Jay
Mistle Thrush
Blackbird

The discussion is still continuing, over cups of coffee, over glasses of beer, whether our nocturnal visitor is a genet or a marten. He/she continues to leave poo gifts on exactly the same spot on the terrace. So here is our evidence:-

A stone marten, seen in broad daylight, high in our plum tree;
A dark-coloured cat-like creature with a long bushy tail, in the olive grove, mid-morning;
A poo present left every third day, in the same place;
The description by the solar engineers, working on our solar array up the hill from the house, who looked down onto the swimming pool and saw a ‘large wild cat’. We were not resident at the time. There have been no other sightings of a large wild cat. 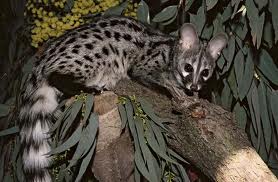 Pablo is convinced it is a geneta [above]. The genet [in latin genetta genetta] is a feline-looking animal, nocturnal, which lives in dense scrub and woodland. Sounds exactly like our valley. Pablo says he has seen many genetas here, over the years. The species has spread to the Iberian Peninsula from North Africa. But it is distinctively spotted.

The animal we saw in the olive grove was not marked like a geneta. It was plain and dark, with a long swishy tail. Could it be a marten [below]? 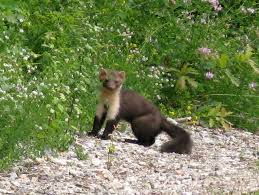 I’ve had some company in my study over the last few days. A lodger, under the sofa. 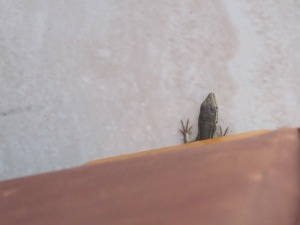 I have no idea how long he’s been inside. He seemed quite happy in his new lodging, every now and then as I sat typing I caught a movement out of the corner of my eye: his head peeping out. So I shut the internal door, opened the French window onto the patio, and left him to find his own way out.

We called him ‘Sumo Toad’ not because he is rather plump, but because of his behaviour when confronted by me with my camera. In true toad fashion, his first reaction when seeing something potentially threatening is to stay completely still. 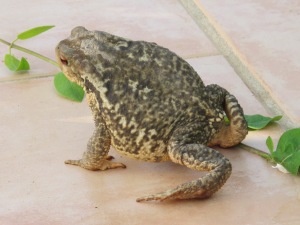 His second reaction was to stretch up on his legs to make himself appear bigger. Then he started to sway from side to side in a slow dance. 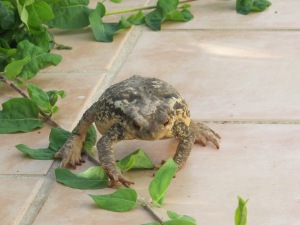 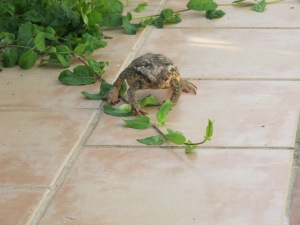 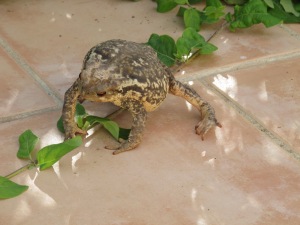 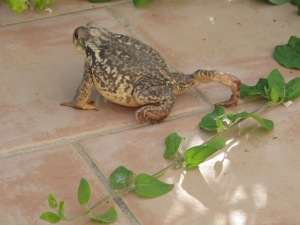 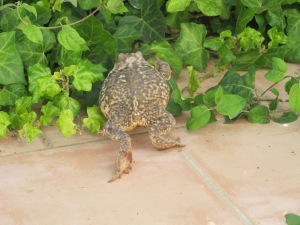 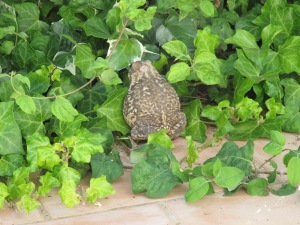 Eventually he decided I was no threat, and he sidled off into the honeysuckle. 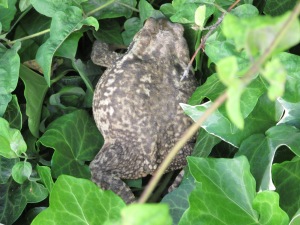 We are surrounded by blackbirds this year, with pairs nesting in trees all around the house. For the first time, one mother has built her nest in the honeysuckle. It took us some time to realise there were chicks there. 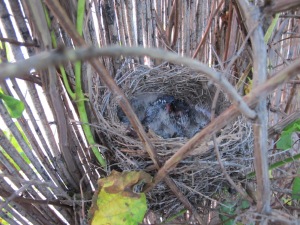 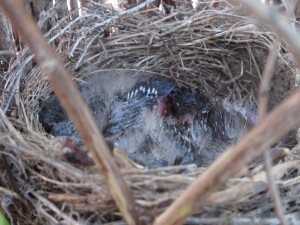 Most of the time they are quiet. When she is away, they huddle together in the bottom of the nest and are invisible unless we climb on top of a wall. As soon as Mum appears and there is the rustle of a leaf, two hungry mouths appear.

Grasshoppers are delicately patterned creatures. I hadn’t appreciated this until one landed on the sofa cushion beside my elbow. 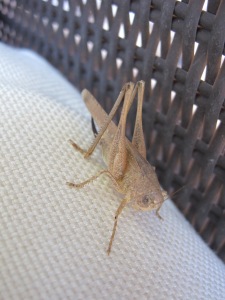 Sandy coloured, tending towards orange, she was delicately flecked, textured almost like a sandy beach: good for disguise on dead leaves and sandy soil I guess.

In fact it might not actually be a grasshopper.  According to expert John from NaturePlus at the Natural History Museum in London, it may be a cricket. “It is holding its legs up, which is a feature of crickets. And with long wings I think this would be a Tettigoniidae. It has an ovipositor making it female.” I had to look up ‘ovipositor’, it is an organ at the end of the abdomen used for laying eggs. Grasshoppers use it to force a burrow into the earth, and cicadas use it to pierce the wood of twigs.

I confess I don’t know the difference between crickets and grasshoppers, but John confirms here that the two below definitely are grasshoppers – Egyptian grasshoppers, Anacridium aegyptium. 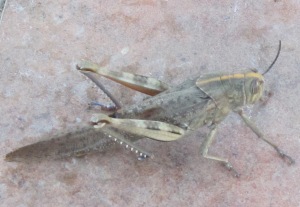 This one [above] was huge, identified by a yellow stripe down the back of his head, and tiny speckles of brown and cream which looked like they’ve been added with a paintbrush.

And the third [below] at first sight looked similar, but without the yellow stripe on his head. 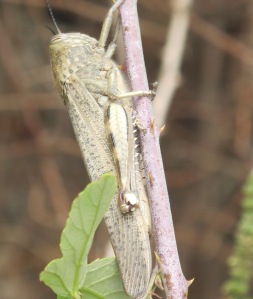 Today we saw three lizards, each was an Iberian wall lizard with yellow stripes along the length of its body. They are often easy to spot first thing in the morning, lying in a patch of sun to heat up. Sometimes they lay on the log pile, other times beside a terracotta plant pot. That’s where they were today, and that’s why we saw them – because workmen came today to install new external metal shutters on the bedroom windows.

One day in March, after the rain, we went tracking: wild animals. Dramatic? Well it is the only time we are actually aware of the presence of wild boar in the valley. We don’t hear or see them. The only presence we see is footprints, in the mud, after the rain. We followed these footprints so far, but found nothing… the mud was, dry, the animal long gone. 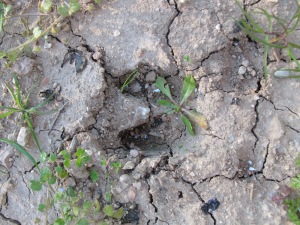 The males are solitary animals outside the breeding season, so that explains why we only ever see the tracks of a single boar. Females and piglets though stay together in groups of up to 20 animals including two or three sows. They rest during the night and day, foraging in the early morning and late afternoon, and sometimes at night. We do see local hunters striding the olive groves with the rifles, but according to our neighbour the number of wild boar in the valley has almost disappeared compared with when he first bought his summer house here 30 years ago. 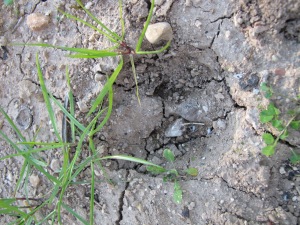 Wild boar are scavengers and will eat almost anything, including grass, nuts, berries, small reptiles, carrion, insects, roots, tubers, rubbish and even the nests of ground-nesting birds. 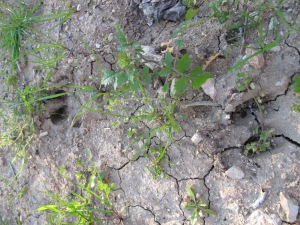 Notes on a Spanish Valley
Blog at WordPress.com.
Loading Comments...