We were sitting in the shade under the pergola, enjoying a late morning cafelito and agua, watching a ‘bootcut’ eagle circling over the olive grove on the hilltop opposite. He was alone, but was still calling, kli-kli-kli, when suddenly there was a different call. Click on the video below to listen…

It was a gecko, hidden somewhere in the honeysuckle and jasmine which climb up from plant pots, through the rough roof of brezo de mimbre [wicker roofing] into the sunshine. The geckos are so difficult to spot, so shy. We know they get into the house through the air bricks. D found one two days ago behind the fridge. Possibly this is why our house is relatively bug-free, for saying we live in the middle of the country.
Seeing or hearing a gecko is always a treat.
5 to remember
la sombra – shade
de enfrente – opposite
solo/a – alone
las macetas – plant pots
el video – video

Our battle with the mysterious poo-ing animal rages on. The previously mentioned tactic of chicken wire and sharp nails had absolutely no effect, so they have been removed. The animal now perches on the pillar and simply poos onto the tiles beside the pool. Dramatic action is called for, so now we have a baited trap, a trampa supplied by Pablo. A basic metal cage with a trap door connected to a hook on which is balanced a piece of meat. Pablo recommended chorizo. The chorizo was ignored and began to smell, so was replaced by ham. The ham was eaten by Pablo’s Alsation puppy Perrita – this means ‘little dog’, the Spanish being unimaginative with animal names. Perrita’s mother is called Lopina, ‘she-wolf’.

Anyway, back to the trampa. At the same time as our poo problem, still suspected of being a stone marten, Pablo was having his own problem with an animal eating his hens at night. He bated his trap with chorizo, it was not eaten. So one night last week he stayed awake and sat by the open bathroom window, his shotgun aimed at the chicken run. The culprit is now dead, a wild cat, a huge wild tabby cat not a lynx or anything exciting. Now as our trampa remains empty, we wonder if the same huge cat is responsible for our poo. 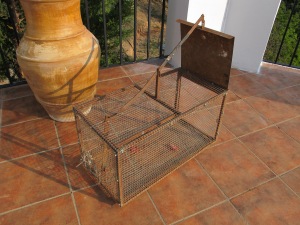 At the same time as this has been going on, we have been plagued with dirty paw prints left overnight on the garden sofa cushions we have been lazy enough to leave out. We’ve tried piling the cushions up, but the cat/cats just knock them down into a cosy bed for the night. The cushion covers are washable, but it is becoming too regular a chore. We got excited that Pablo’s huge cat could be the owner of the paw prints, and our double problem was solved. In the countryside it is common to see once-domesticated cats and dogs roaming wild and reproducing, they can be a real nuisance.
Unfortunately last night we left out our sofa cushions as a test, and yes there were muddied paw prints this morning. So tonight we will set up the trampa with chorizo and place it beside the sofa cushions.
To be continued…
5 to remember
la trampa – trap
la pata – paw
la huella – footprint
el gato – cat
la gallina – hen

Yes, he is there. A gecko. Squeezed between the pergola and the wall. 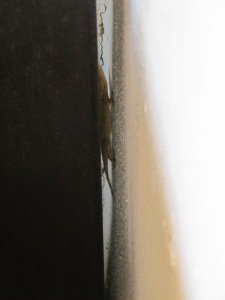 We love the fact that geckos live around our terrace. They are more timid than the lizards which will bravely cross wide open spaces. We tend to only see geckos when we have disturbed them from their hiding places, they are mostly nocturnal. The pergola on our terrace is supported by wide black metal beams, hollow beams, and we suspect this is where the geckos rear their young. At this time of year, we often hear them chirping.
5 to remember
el geco – gecko
la pérgola – pergola
la pared – wall
nocturno/a – nocturnal
la viga – beam