Living here we see nature in its beauty, and its strength, every day. The storm in March 2013 was not as bad as the one which destroyed the earlier version of the bridge, the new bridge thankfully is stronger. But it transformed the river overnight from a quiet stream, winding its way through the bottom of the valley, to a dark brown muddy monster cutting corners, tearing up riverbanks and pulling riverside plants and reeds up by the roots.

The most dramatic transformations are of the little and big waterfalls. The force of water over the big waterfall [below] takes weeks to return to normal. 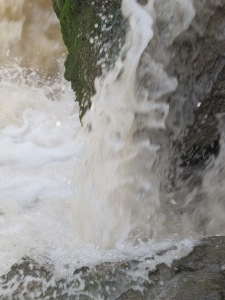 The smaller waterfall is nothing more than a rocky rapid when the river is at its normal strength, but after a storm, it changes character [below].

The ford was flooded again, the water level rose above the bridge and sand washed up the track [below]. 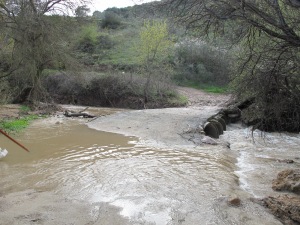 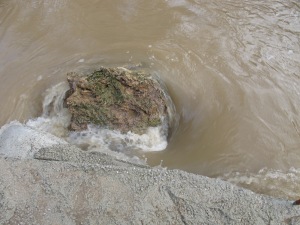 Further along the valley is a tiny footbridge over what is no more than a spring, trickling down into the river. Except after this storm, it too enlarges and becomes wild.

So gradually, year on year, the course of the river gradually alters. Tiny bends are straightened, low banks collapse. From our house, higher up in the valley, we can see the tree-lined route of the river, lined by graceful poplar trees, and are thankful we do not live beside it during its winter tempests. 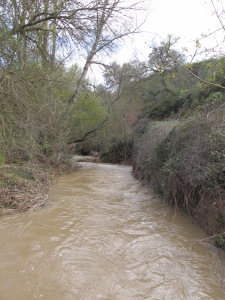 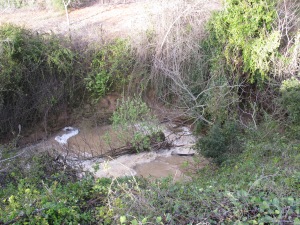 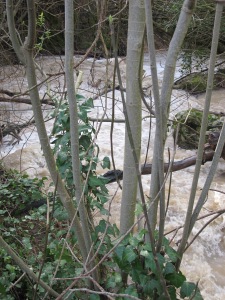 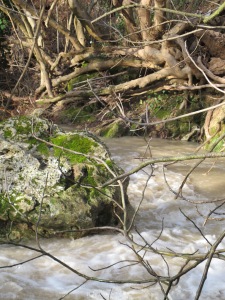 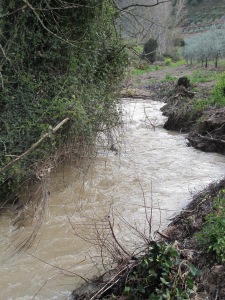 It takes more than a few days without rain for the level of the river to drop. Lots of verbs and adjectives are appropriate when watching the power of the river here. Pounding, splashing, crashing, violent, unstoppable …all seem insignificant when expressing the force of the current.