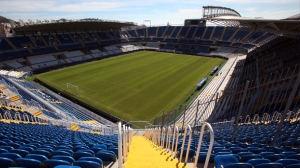 We will miss going to the football match tomorrow night. Malaga FC faces Atlético Madrid at home in a league match at La Rosaleda stadium. The game is a six-pointer against the second-placed side. Las Malaguistas are currently fourth in La Liga, 10 points behind Real Madrid and with Valencia and Real Sociedad hot on their heels. Malaga manager Manuel Pellegrini has been connected with a possible vacancy as Manchester City manager this summer, but he’s shown loyalty to the seaside club owned by Qatari businessmn and royal Sheikh Abdullah Al Thani who reportedly put the club up for sale last year.

Going to the football at La Rosaleda is a fantastic experience. We’ve learned to double-check the date and time of kick-off before leaving home, as the matches are prone to very last minute changes. It’s good to get there early and sit outside one of the bars, soaking up the atmosphere while eating pescados fritos with a cool cerveza. The noise inside the stadium is overwhelming, it’s about the size of Stoke’s Britannia Stadium and just as loud. The food is different too – no burger or hot dogs, no frying onions. The main snack is nuts and seeds bought from one of many stalls outside the stadium. We’ve found the best atmosphere to be at the summer night matches, either the first or last matches in the season, kicking off at 10pm in the heavy heat.

Tomorrow it will be difficult for Malaga to focus on Atlético given its return home Champions League tie against Porto on March 13. Malaga is 1-0 down from the first leg after failing to score an away goal. The team will be determined to get as deep as possible in the Champions League this year, as the club is banned from playing in Europe in 2013-2014 for failing to fulfil financial obligations. This casts a shadow over the success at Malaga FC, which has been good for the town and for Andalucía. This season there are four Andalucían teams in La Liga: Real Betis 7th [before kick-off today] Sevilla 12th and Granada 15th.

My husband and I are pretty football mad, but it does seem a little strange that we get excited about Malaga FC’s games while our Spanish neighbours are most likely watching basketball or bull-fighting on television!