This recipe has been marked in the cookbook for ages as one to try, but I didn’t and I don’t know why! Perhaps it’s the name, it’s a recipe by Ella Mills which she calls ‘Raw Brownies’ which does not do them justice. Simple to make, no baking involved, and impossible to stop nibbling. They are very rich, so perhaps mark out portions slightly smaller than your usual brownies! 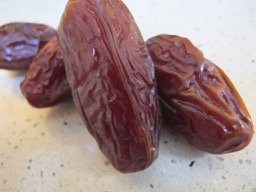 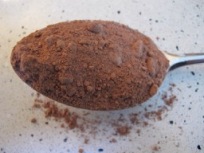 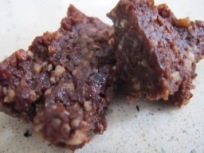 In the list of ingredients, the syrup is included as optional. However I found my mixture was crumbly so added 1½ tbsp of agave syrup until it became sticky. This probably depends on your dates, be sure to use dates from the fresh fruit section rather than the longlife dried version found in the baking aisle which are not sticky enough. 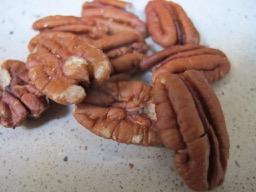 Place the nuts in your food processor and pulse until they become gritty. 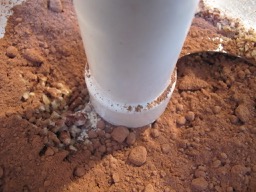 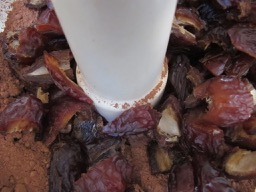 Add the pitted dates, cacao and blend. Now decide if you want to add syrup, or need to add syrup if the mixture is a little crumbly. Pulse until the mixture sticks to the back of a spoon and gathers into a large ball. 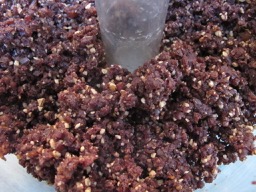 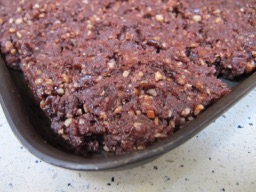 Spread the mixture on a clean baking tray, no need to grease it first. Spread it out evenly, I found this quantity used less than half the space of the baking tray. Place the tray [above right] in the freezer for one hour. 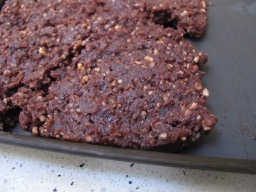 Remove the tray from the freezer [above], cut into bars, and place in an airtight plastic box. Store this in the fridge.

What I will do differently next time:
Add a few drops of vanilla essence
Substitute almonds for the pecans
Use maple syrup instead of agave syrup
Mark out the portions before the tray goes into the freezer

If you like this,try:-
Gluten-free cherry cake
A sweet and sour cranberry cake
Peanut butter biscuits 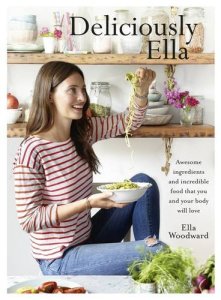 This recipe is from ‘Deliciously Ella’ by Ella Mills
Amazon