Can you tell the difference between a Great Tit and a Blue Tit? No? Before we came to live here, I was hazy about them too. Sometimes it is still a bit hit and miss, but basically the Great Tit is larger and looks as if he is wearing a yellow waistcoat over a black shirt. Or alternatively, a black tie with a yellow shirt. The Blue has a plain yellow breast. Not very technical ‘birding’ language, but I hope you know what I mean. Although both types of Tit are resident here, we see mostly Greats. Its colouring is slightly stronger than the Blue, though in flight to be honest they whizz by in a flash of yellow and blue. 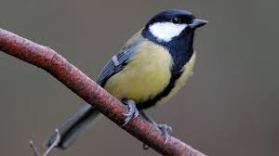 Found across Europe, there are thirty different races of Great Tit and there are just as many variations of Great Tit song as there are of the bird. In the spring, if you hear a bird song you can’t identify there’s a good chance there’s a Great Tit nearby. Particularly familiar is the two-tone ‘teach-er teach-er’.

Listen to the song of the Great Tit at Xeno-Canto.

Listen to the song of these other birds we see in our Spanish valley:-
Grey Wagtail
Sparrowhawk
Jay

Our most used bird book? ‘Collins Bird Guide: The Most Complete Guide to the Birds of Britain and Europe’
Amazon UK