This recipe is the result of not shopping properly. I thought I had bought everything needed to make this vegetable lasagne recipe from the Cranks recipe book, but it turned out I was missing a couple of key things. Sheets of lasagne. Crème fraiche. So I improvised and added a couple of extra things I happened to have. This is the result. It demonstrates that being flexible can often be a nice surprise. Whatever you change, always include the roasted butternut squash slices in pesto, that’s lovely! 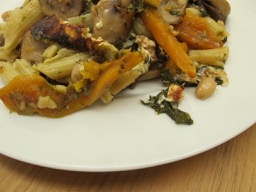 As with a lot of ‘vegetarian’ recipes, I find them sadly lacking in protein. So I added a tin of haricot beans which I had in the cupboard. It would work with any type of tinned bean. 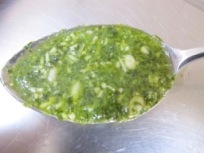 The separate elements for the lasagne can be prepared in advance, and assembled just before eating. Preheat the oven to 230°C/450°F/gas 8. Place the slices of butternut squash in a bowl and toss with 2 tbsp olive oil, season to taste. Spread in a single layer on two baking trays and roast in the oven for about 20 minutes until soft when checked with a knife, and going brown around the edges. Put into a bowl to cool slightly, add the basil pesto and set aside.

Meanwhile, cook the lasagne sheets or your own preferred pasta. Drain and set aside.

Slice the cleaned mushrooms. Heat 1 tbsp olive oil, two chopped garlic cloves and the tamari in a wide frying pan. Add the mushrooms and cook gently until they begin to release their juices. Add 1 tbsp crème fraiche, turn the heat down and simmer until the juices begin to reduce. Set aside. 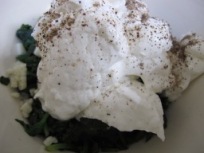 Put the spinach, and fresh basil if using, into a saucepan with a splash of water. Cook with the lid on over a gentle heat so the leaves wilt. Drain in a sieve and press out the excess liquid using the back of a large spoon. Chop on a board then put into a bowl. Add 30g grated Parmesan, 1 clove chopped garlic, nutmeg, salt, pepper and 4 tbsp crème fraiche. Set aside.

Layer the vegetables and pasta in a large ovenproof casserole dish, finishing with a creamy spinach layer and the remaining crème fraiche. Sprinkle the top with the grated Gruyere or hard cheese.

Bake in the oven for about 25 minutes until the cheese is melted and golden.

Bake in the oven with a lid on the casserole, or cover with a layer of foil, for 30 minutes. Remove the lid and continue to bake for a further 15-20 minutes until the cheese is melted and golden. Test with a fork to make sure the vegetables at the bottom of the dish are hot.

What would I do differently next time?
Add more yogurt
Stir the haricot beans into the spinach and yogurt sauce
Substitute courgette for the spinach, sliced thinly and fried lightly in a little olive oil 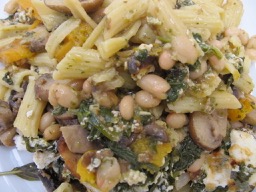 If you like this, try:-
Mushrooms + wine + butternut
Cheesy nutty herby mushrooms
A cassoulet of aubergines 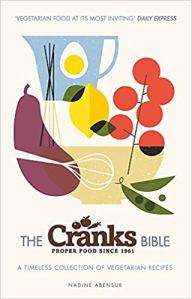