I didn’t know, did you, that the almond nut is actually called a ‘drupe’ which grows from the tree’s fertilised flowers. The drupe has a leathery hull which surrounds the nut, furry, giving it the look of an unripe peach. When this outer husk dries and splits, it is time to harvest the almonds which for us is August.

I remember our first time in Spain, waking up early one August morning to a knocking sound in the distant hills. Mystified, we got out the binoculars and watched two men in an orchard. They were behaving oddly, knocking the trees with long sticks. I now realize that the method for harvesting almonds is similar to that of olives: spread a tarpaulin or net beneath the tree, whack the tree with a stick so the nuts fall.

Harvest here is over for the year, a few drupes still hang on the trees as a reminder that we missed a few. 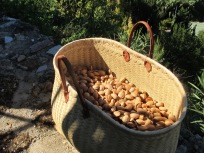