The concept of luxury brownies and lighter brownies seems a contradiction in terms to me. But one afternoon, craving something chocolately but having a small amount of chocolate chips in the baking drawer, I hit upon this recipe for which I had all the ingredients. Truth is, if you didn’t know they were called ‘lighter’ you wouldn’t have guessed.

This is our gluten-free version of a Mary Berry recipe made with eggs from our neighbour Pablo, and walnuts from our trees.

Pre-heat the oven to 180°C/350°F/Gas4. Grease and base line a 30x23cm [12x9in] roasting tin or brownie tin with greased greaseproof paper. This bit is important as brownies, by their very nature, are very sticky.

Heat a pan of water, then rest a bowl over the top and melt the chocolate slowly with the margarine. Remove from the heat and allow to cool a little. 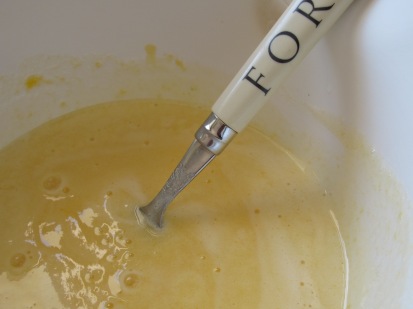 In another bowl, whisk together the eggs and sugar until light. As we used Pablo’s eggs, we checked each first for freshness by breaking into a separate small bowl. Add the cooled chocolate mixture and mix well. Sift the flour and baking powder into the mixture and carefully fold in, so that you fold in air. Stir in the chopped nuts.

Pour the mixture into the prepared tin and level the surface. Bang the tin on the table, to eliminate large bubbles.

Bake for about 40 minutes or until the brownie is well risen and a dull crust has formed. If your oven, like ours, is unpredictable, check after 20 minutes and if necessary rest a piece of foil over the top to prevent burning. The brownies should be a little gooey in the centre.

Allow to cool in the tin before turning out, leave to cool completely on a wire rack before cutting into squares.

If you like baking, try these other recipes:-
Gluten-Free Cherry Cake
Apple and Cinnamon Cake
Cheesy Scone Bake