This is comfort eating at its healthiest, but I challenge you not to want second helpings. It’s a vegetarian take on lasagne, layers of veggies and tomato sauce, but without pasta. Though if you are feeding a hungry horde it would work with a couple of layers of pasta sheets. Unlike lasagne, you don’t have to make a cheese sauce; instead there is a creamy sauce whizzed up in the blender.

The recipe is by Anna Jones, a chef who first worked at Jamie Oliver’s Fifteen restaurant. This background explains why her recipes all have an Italian-feel. 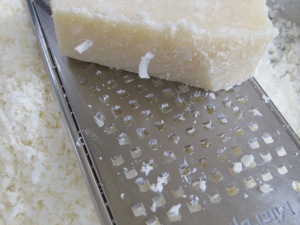 Lightly grease two baking trays. Arrange the sweet potato discs in one layer on the trays, sprinkle with salt and pepper. Roast for 30 minutes, until just cooked and browning around the edges.

While the potatoes are cooking, make the tomato sauce. Fry the sliced garlic in a little olive oil, over a medium heat, until it begins to brown around the edges. Add the rosemary, stir. Add the tinned tomatoes. Bring to a simmer and leave for 10 minutes, simmering lightly, until the sauce becomes thicker and sweeter. Season with salt and pepper, and set aside.

In a separate frying pan, soften the onions in a little olive oil with the thyme, over a medium heat, until soft and sweet. This will take about 10 minutes. 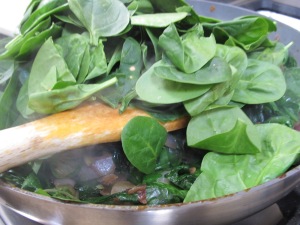 Then add the spinach, a little at a time, and let it wilt.

Now make the butter bean sauce. Put the tinned butter beans and the liquid from the tin into a blender, add the lemon juice, zest, olive oil, and a sprinkle of salt and pepper.

Blitz it so the sauce is smooth and loose enough to spread . If it is too thick, add a couple of tablespoons of water and blitz again. 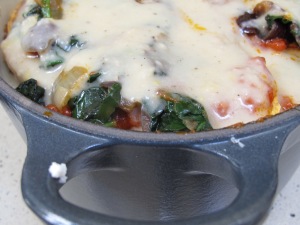 Bake in the oven for 30 minutes until golden brown on top.

Don’t worry if you cook too many sweet potatoes. We did, so the leftovers were thrown into a potato mash mixture with cooked sprouts and fried onions, and made into potato cakes. We eat these for breakfast with a fried egg on top. 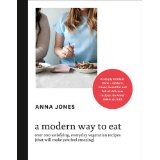 27 thoughts on “A winter treat”