We love traditional leeks vinaigrette for lunch on a sunny day, so when I spotted this recipe in a magazine we had to try it. Sesame seeds, one of my favourite things.

Next time, I will make it slightly differently:-

The original recipe calls for fresh green garlic cloves, which I didn’t have. I used one, raw, thinly sliced garlic clove. It was too strong for our taste, next time I will use two, thinly sliced, and soften them first in a little olive oil so they are sweetened.

Chef Andoni Aduriz, whose recipe this is, suggests substituting the sesame seeds for hazelnuts, almonds or other nuts.

120g of sesame seeds is a lot. I will try making it with half the quantity of seeds, toasted, with a couple of heaped tablespoons of tahini paste.

Aduriz gives this quantity as serving 4, I think as a vegetable dish. We ate it as a main course, for two, with crusty bread. 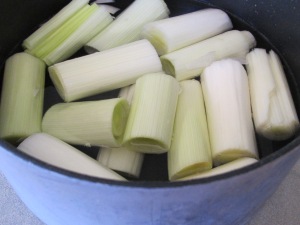 Wash the leeks, and rinse to remove soil. Chop into 6-8cm pieces. Cook in a pan of boiling salted water for 10-15 minutes until tender. Drain, set aside in your serving dish.

Toast the sesame seeds in a dry frying pan, watching over them so they turn golden but don’t burn.

Tip into a mortar, add 1 tbsp cold water and, using the pestle, grind into a paste. I smashed them to release the flavour, but left the seeds intact [I think this looks prettier].

Transfer the sesame paste to a bowl, add the olive oil, vinegar, a pinch of sea salt, and sesame oil.

While the leeks are warm, pour the sesame dressing over and set aside. [Aduriz re-heats the leeks and serves the dish hot, we prefer to eat it at room temperature]. 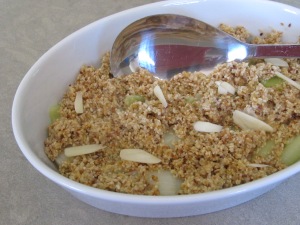 Adapted from an original recipe by Adoni Aduriz at Mugaritz restaurant, San Sebastian, Spain For more about Mugaritz, click here.