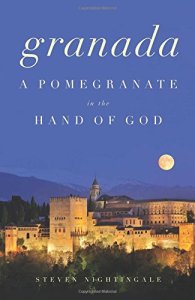 Anyone who really wants to understand the magic of Granada should read this book. It combines the history of a city, of al-Andalus, its art, music, philosophy and poetry with the story of an American family moving into a house in the city’s Albayzín.

The author’s description of the delighted reaction of his new neighbours to his small daughter, and their welcoming generosity, mirrors exactly our experiences as newcomers in rural Andalucía. There is a charm about the people here, an old-fashioned courtesy and fascination with strangers, which the author also describes in Granada.

At times I wished for a little more about modern-day Granada and less of the history [this has the feel of an academic book] but it is written with an easy poetic style and is a broad introduction to Moorish Spain. It is a rich and complicated story which, when known, aids understanding of today’s Andalucía.

If you like this, try these:-
‘The Almond Blossom Appreciation Society’ by Chris Stewart
‘South from Granada’ by Gerald Brenan
‘Ghosts of Spain’ by Giles Tremlett
If you like books, check out my book reviews at my website.

‘Granada, A Pomegranate in the Hand of God’ by Steven Nightingale [UK: Counterpoint]

1 thought on “Book review: Granada, A Pomegranate in the Hand of God”