This has to be the easiest and tastiest of all the salads we eat here. And it is VERY Spanish. High quality ingredients, and not many of them. Each flavour is distinct.

Make a large plateful [it is generally served on a large platter, not in a deep salad bowl] and eat it as a main course. Best made with the large ugly Spanish tomatoes that taste the best.

Slice the onions thinly and separate into half-moon shapes. 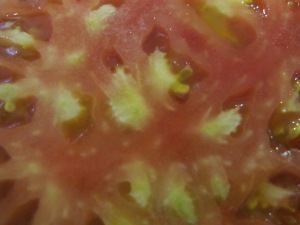 Slice the tomatoes thickly, cutting out the hard core and damaged skin. Retain all the juice where possible.

Peel the garlic and slice as thinly as possible.

Assemble your salad on your plate, layering tuna, tomatoes and onions, and sprinkling each layer with garlic, salt and pepper.

Finish with a hefty drizzle of olive oil.