I am 100% perfect at identifying a Pied Wagtail, they are the black and white birds which seem to haunt car parks around the world, their tails cheerfully wagging up and down. But its sister species are not as common, and more awkward to identify. Their names do not help. And all three occur in Spain. 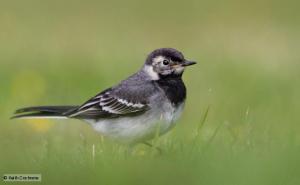 The Pied Wagtail appears in mainland Europe as a paler version called the White Wagtail [above], though to be honest the difference is minimal. We most often seen this Wagtail on the track down to our house, it jumps ahead of the car 20 yards or so, and lands each time in the middle of the track. And so we proceed along the track, the birds hopping in front of us, with us following behind. If only they would hop to the side of the track into the olive groves!

The Grey Wagtail [above] is also resident in Spain. It is nothing like its name suggests, in fact it has a pretty yellow breast and another yellow flash beneath its tale. Often this bird is identified by the flash of yellow as it flies past. But confusingly it is not the Yellow Wagtail because…

… the Yellow Wagtail [above] is almost totally yellow, and if not seen clearly can be mistaken for one of the bigger yellowy green birds such as Orioles or Green Woodpeckers. However the Yellow is seen in Southern Spain only on migration, so is a rare sight.

Click here for more about the Pied Wagtail at the RSPB website…
here for the Grey Wagtail…
and here for the Yellow Wagtail.