There was a first for us today. A grey heron flew across the valley, across the olive grove and settled in the small poplar tree. We could see him quite clearly: grey herons are tall, up to 100cm, grey plumage above with a dirty white breast. From a distance as he flew he looked a little like a swan, with his neck retracted in an S-shape. 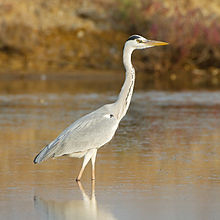 Although it was our first sighting here, most types of heron are in southern Spain at some point. Night herons during the summer, grey in the winter, while squacco and purple herons pass through only on migration. We did see a squacco heron once, but not in the valley: along the river in Córdoba.

The grey heron, which over-winters in Spain, is resident in northern Europe during the summer. They nest in reedbeds, which we have by the river, but unfortunately we’ve never seen a nest here.

6 thoughts on “A rare grey heron”