There are fish stews, and there are FISH STEWS. This, is one of the latter. Do not muck around. Eat with crusty bread to dip in, and a spoon to get all the sauce.

Heat a large casserole dish over a high heat, when hot add the olive oil. Turn the heat down to medium before adding the onions, fennel, sliced and chopped garlic, fennel seeds, chilli and saffron. Season with salt and black pepper.

Sweat the vegetables slowly in the olive oil for 15 minutes.

Add the tomatoes, breaking them down with a wooden spoon, then pour in the water/stock and the potatoes. Check seasoning.

Simmer for 20-25 minutes, or until the potatoes are tender. We cooked the stew to this stage in the morning, then set it aside. We removed the two chilli halves at this stage so the stew had a gentle background chilli heat rather than being tongue-burning hot.

For the optional almond topping:-
Preheat the oven to 180C/Gas 4. Put the almonds on a baking tray and bake in the oven for 5-10 minutes until they are pale golden. Roughly chop with a large chopping knife to make fairly large crumbs. Combine with the paprika and salt, and set aside.

When you are ready to eat, re-heat the casserole gently over a medium heat before adding the fish. 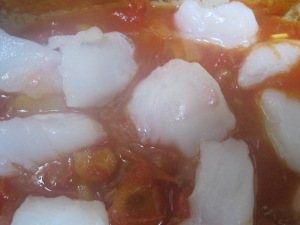 We cooked the monkfish in the sauce for 10 minutes before adding the cooked prawns which simply needed heating through. You will need to cook your fish according to type. 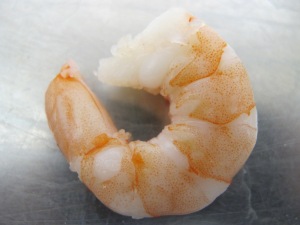 Spoon into hot bowls and sprinkle with the almond topping. We simply ate it with crusty bread and a spoon.

5 thoughts on “Fish stew to eat with a spoon”