The weather can change suddenly at this time of year. I drove into Ronda, braving it in the summer time in order to visit our fridge repair man and see if a vital part had arrived. The traffic was gridlocked thanks to tourist buses and rental cars. Then a tormenta, a thunderstorm, arrived without warning and all hell broke loose. 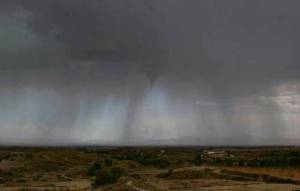 The flash floods cut through the olive groves, the murky water cutting deep channels, and Spanish roads are not designed with flooding in mind. I took the main road route home from Ronda, rather than my usual cross-country route but I still came unstuck. The first road I tried was closed by a tide of brown fast-moving water cutting straight across the tarmac. At the next road I was waved back by another driver, so I did a u-turn, returned to the main road and set off in a circuitous route. Thankfully the third route I tried was navigable and the track to our house through the olive grove was, although slippery, manageable. By now the tormenta was long gone, the sky a brilliant blue, and the earth steaming. 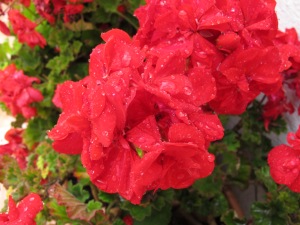 The house looked a little worse for wear. Everything was drenched. The rain had come without warning so water had blown in the kitchen door, in through open windows, the terrace was slicked with a thin layer of mud and the sunbed cushions sopping. The delights of Spain in August. A few hours later, everything was dry again and it was as if the tormenta had never happened.

2 thoughts on “A summer flood”