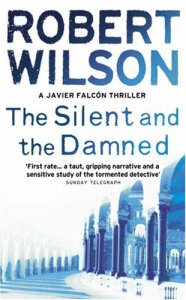 Second in the Javier Falcón series set in Seville. Santa Clara is a wealthy neighbourhood where people stay inside their elegant air-conditioned homes and don’t mix much with their neighbours. Very un-Spanish. And then people start dying.

First, a husband and wife. Was it one murder and a suicide, or a double-murder? Falcón investigates only to find, living opposite the murdered couple, the wife of his last murder victim [in The Blind Man of Seville]. And this is how Robert Wilson neatly intertwines the back story from the first novel, bringing forward the things a new reader needs to know. Falcón has moved on since then, gone are the formal suits, now he wears a shirt and chinos and seems more relaxed, more at peace with himself. But this is a detective novel, and detectives are traditionally troubled souls so it is not long before the cracks appear.

The deaths keeping coming in the 40° heat, Falcón must deal with the impending marriage of his ex-wife plus the growing suspicion that all is not well at police headquarters. There are links to characters in the first book, dodgy characters, further crimes are hinted at. Will he be allowed to continue his investigation, or will higher powers decree his case unviable? And does Javier Falcón have the mental energy left to care?

An excellent follow-up to The Blind Man of Seville, click here for my review. I read this quicker than the first, I think because of the familiarity of the character. I understand now why the books were serialised on Sky Atlantic.

Click here to find out how this second book got its name, and why Robert Wilson originally wanted to call it The Vanished Hands.

Click here to watch Robert Wilson interviewed on The Murder Room. He talks about writing crime fiction, why people want to read about criminals, and why the crime novel he most admires is George V Higgins’s The Friends of Eddie Coyle.
‘The Silent and the Damned’ by Robert Wilson

9 thoughts on “Book review: The Silent and the Damned”