Plan ‘green campaign’ started as soon as we moved into the house. 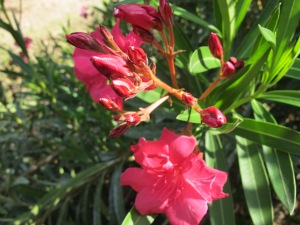 Although the valley was green, we realised pretty quickly that a lot of this was down to self-seeding weeds and the problem was getting worse. So, we decided to clear and re-plant. The plan was most definitely not to create a garden, rather to re-plant with native shrubs which needed little upkeep and would survive the summer drought and winter cold.

Ambitious? Yes, of course, but now we are a few years down the line and the bare slopes and hours of back-breaking weeding is over, our reward is mature shrubs, evergreen throughout the winter. After planting a few mistakes, we settled on a core collection of shrubs which through trial and error we learned would survive. By far and away the most prominent of these was the oleander. The Spanish call it adelpha, Pablo in ‘campo speak’ calls it elfa.

We planted them everywhere: red, pink, and white. At a rough guess, we planted in excess of 150 plants.

All over the slope in front of the terrace [below]. Some of these were transplanted when the builders constructed the terracing, and moved back in afterwards. 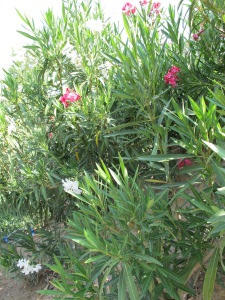 On the right-hand side of the orchard steps [below]. 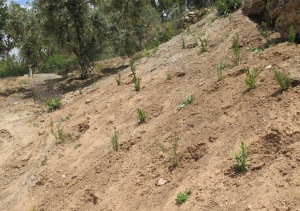 In 2012 [below], we planted a new line along the left-hand side of the orchard steps…

… and more on the bottom level, after we’d cleared the builder rubble after completion of the terracing. 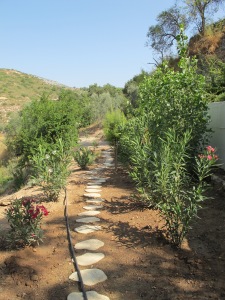 11 thoughts on “The green campaign: elfas”