The Spanish have reverence for their elderly, the extended family still very much exists here and small children and their grandparents and great-grandparents are part of a close family circle and are important within their wider community. This is partly such a strong fact here, I think, because in the countryside people tend to live where they were born; families are not divided so much by commuting. But this is the campo, it is not typical of life in a Spanish city. Age though, is respected. 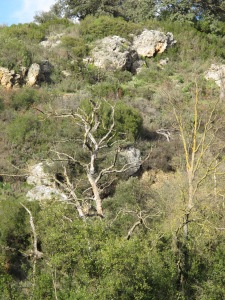 On the hillside, the trees are bare as winter seems to go on and on. Young trees beside old, the bark of young and old decorated alike with splashes of yellow lichen and green moss. This tree stands out from the rest because of its height, its breadth. It is, I think, a walnut. I will need to check again once the leaves appear which, if it is a walnut, will be among the last to appear, not until spring enters its second half. They grow well here, wild on the hillsides, as they are tolerant of drought. The average lifespan is 80 years though some live much longer, several times longer than the average human. 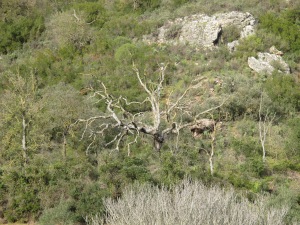 I wonder how old this tree is? Was it just a sapling as the Spanish Civil War was fought around it? 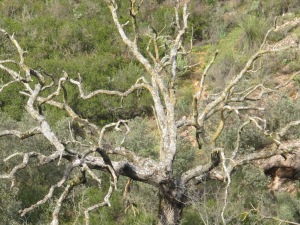