We awoke yesterday to the layers of sound which help determine the time of year. First, the waterfall. The noise is always here but how loud is it today? How much water is falling, have there been rains elsewhere to swell the river? Birdsong is next: the general mass of sound, like the dawn chorus in which no individual song can be picked out. Third, as we awaken properly, we can hear the individual birds which tell us if it is summer yet: cuckoo, woodpecker, an oriole grunting, bee-eaters chirruping high in the sky. Mid-morning, there is another sound in the valley. The bell rings at our gate.

It is the builder’s merchant from the next village bringing a truck full of gravel. This is a yearly routine, tidying the paths, smothering the weeds. Antonio the driver is always smiley and helpful, depositing his dusty load and manoeuvring his truck without hesitation in the tight space of our driveway. Hours of barrowing the gravel lie ahead of us. This is definitely a job for the spring, with lots of rests for chilled beers. 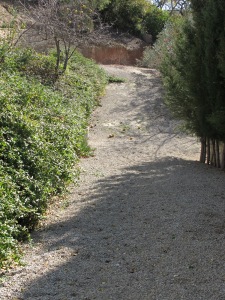 Each year we are thankful when the delivery takes place without incident. When the first gravel was delivered, the truck overbalanced on an awkward corner [below] and threatened to tumble down into the valley. 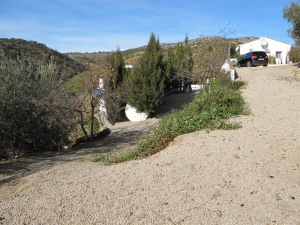 The driver’s side was perilously tilted, Antonio exited his cab quickly, white-faced. There was much shouting, the most animated I think I have ever seen Spanish workmen. The gravel was quickly dumped, the truck secured to a tree by a rope. Once the truck was stabilised, there was much scratching and shaking of heads, many shoulders were shrugged. How to move it? The solution? A telephone call followed by the eventual arrival of another truck, shovels, ropes, men. The memory of this drama returns to us, each year. The gravel is now deposited on the driveway: more barrowing, but level!