Somehow, to me this teabread just has to be eaten in winter; on a cold afternoon when you’re warm inside. It doesn’t feel right in the summer. So now I have the chance to make it, not that it is time-consuming but there is preparation to do the night before. This is based on my mother’s recipe which is I think the traditional Welsh one, bara brith, but there are variations around the UK. 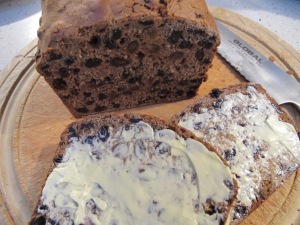 It’s a strange recipe, no fat and only one egg. I use a campo egg, not one of Pablo’s, but bought from the village. D and Pablo had gone to the ferretería; D stopped outside the doorway which leads to the small general store and told Pablo he needed to buy eggs. Pablo shook his head and pointed down the street. They went into the tabaquería, the tobacconist’s, where six brown, dirty eggs were produced from beneath the counter. D bought them all for €1. Bargain!

The night before you plan to make the cake, measure the currants, sultanas and sugar into a bowl [above]. Add the hot tea, stir, cover, and leave overnight. Next morning it will be thick and gooey [below].

Beat the egg in small bowl.

Stir the fruit mixture well to combine, before adding the flour and egg. Mix until blended.

Turn the mixture into the loaf tin [below]. Level the surface, and give the tin a tap on the table to pop any trapped air bubbles.

Bake for 1½ to 1¾ hours or until well-risen and firm to the touch [below]. A fine skewer inserted into the centre should come out clean. 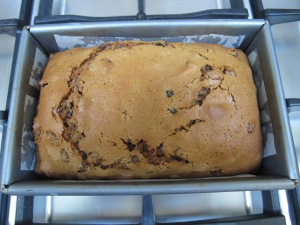 Cool in the tin for 10 minutes, then turn it out and leave to cool completely on a cooling rack.

We eat it sliced and buttered. It keeps well in a tin.

20 thoughts on “Traditional teabread for a chilly day”