Life in our valley sometimes seems like we are wrapped in a cocoon, safe from the outside world. We had a rude awakening four years ago when the benign weather turned angry. It was the biggest storm we had seen here, have seen here, and it taught us to prepare for flood. 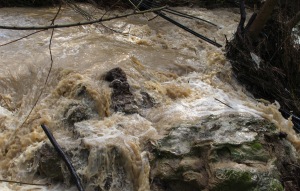 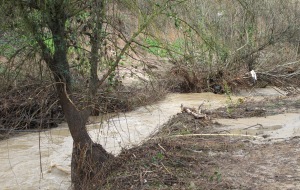 So much rain fell late December 2009/early January 2010 that the river, which runs through the bottom of our valley, swelled to previously unseen proportions. The track which links our house to the main road, two miles away, passes our house and continues downhill to the valley floor. It crosses the river via a low concrete bridge and peters out at the gate to our two neighbours’ distant properties. 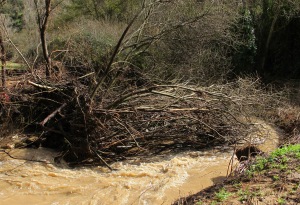 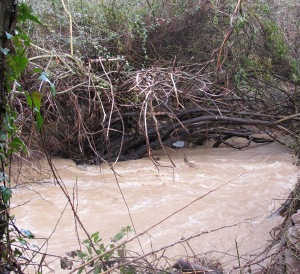 The only people who pass this way are olive farmers tending their groves, and our neighbours on their occasional holidays. The river washed away the concrete bridge. In February the water was still flowing over the crossing at a higher than usual level [below]. Only tractors could pass. The water was 2ft deep. 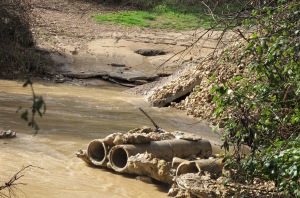 The power of the water changed the course of the river, rounding out curves, cutting new routes with a force that was frightening. It broke concrete and hurled 2m long drainage pipes onto the riverbank as if they were pieces of Lego. Upriver, the waterfall thundered and roared… there was something fascinating about the waterfall which drew us often to stand and admire nature at its wildest. 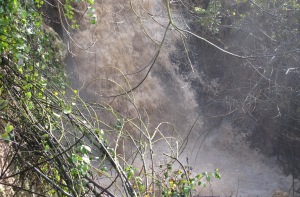 A meeting was hastily convened between the neighbours, the local farmers who needed access to the valley, the village builder and the alcalde, the mayor. There was much discussion, nothing was achieved except an agreement that nothing could practically be done until the flood waters receded and the land dried out. We simply had to wait for the amount of water to reduce, which meant the rain had to stop falling on the hills around us. It continued to rain and what we had only known as a large stream continued to be a raging torrent, pulling with it the trees and shrubs which lined the riverbank. It was dank and brown, filthy, churned up with mud and debris from the hills, farmer’s fields and olive groves for miles around. 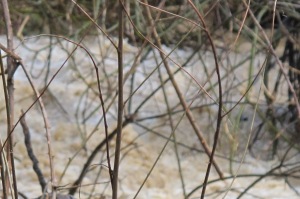 Money would be found from the council budget, we were assured as access to properties was a priority. Money was not the reason of the delay. Spain’s economic crisis was already building. 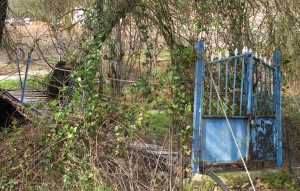 Access to our house was unaffected as it sits high up the hillside, but the holiday farms of our two neighbours were inaccessible except via a dangerous, flimsy wooden footbridge [above]. For months, both families were unable to visit their homes. Everyone waited for the land to dry.

By April, the level was receding. The waterfall [below] looked reassuringly normal, the water was clearer. 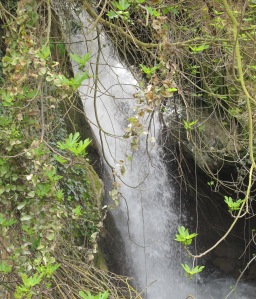 It was possible to ford the river at the old bridge [below] in a 4×4 and, carefully, by car. 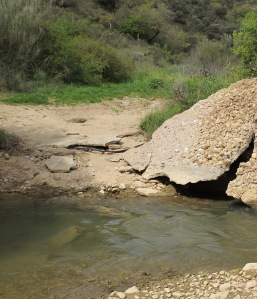 By May, nature was healing itself. Shrubs came into leaf, the ugliness covered by green [below]. For once we were thankful for weeds. New growth covered the red gashes in the riverbank where soil had collapsed and been borne away on the water to a lower stretch of countryside where the river meandered calmer and quieter than in our secret valley. 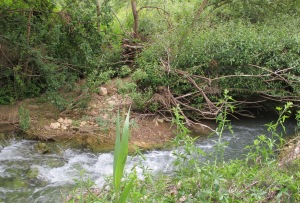 By July [below] the river had slowed, algae moved in. 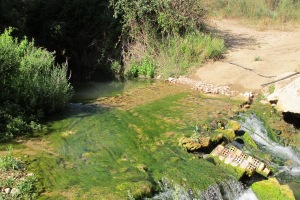 The bridge was rebuilt in August 2010.