Our apples are beautiful this year, it’s the first real glut we’ve faced after the wet cold spring killed so much blossom. So yesterday we made a cake we’ve never tried before. Actually it’s less of a cake and more of a pudding, we ate it with a large dollop of natural yogurt. We used a deep pie dish rather than a cake tin. It’s definitely on our regular ‘apple glut’ list.
The recipe is from Garsons, the Pick-Your-Own farm people in Surrey, they call it ‘Annie’s Apple Cake’:-  http://www.garsons.co.uk/

Pre-heat the oven to 175°C.
To make the sponge base. Sift the flour and baking powder into a large bowl, stir in the caster sugar. Whisk the egg and milk by hand, Melt the butter, and whisk into the egg and milk mixture. Make a well in the flour mixture, pour the egg mix into the centre and fold until smooth. Pour the mixture into a 23cm round flan dish.
To make the topping. Wash and slice the apple, arrange in slices onto the sponge mixture base, working from the centre out in rounds. Melt a little butter and brush over the apple slices. Stir the cinnamon into the demerara sugar, and sprinkle over the apples.
Bake for 25 minutes at 175°C.

I defy you to leave this uneaten. The sponge is so soft. We’ll be trying this method with other fruits. 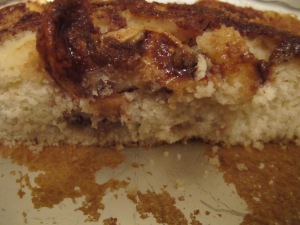