Few airplanes cross over our valley. In the height of summer we may hear the whirr of a fire helicopter carrying water in its belly to a distant fire, the whirr that always makes our hearts beat faster as we scan the horizon for smoke. Probably once a year a light airplane passes overhead. We used to see, once a week, a high trail of a big airliner, a fine line heading due north from South Africa we presumed; haven’t seen that for a while so perhaps the airline’s route has changed. Rarely, airforce jets.

We do not dislike the passing traffic which travels high, so high we cannot hear the engines, because they leave behind a special gift. Con trails, short for condensation trails, are the long thin artificial clouds which form behind aircraft. Most often triggered by the water vapour in the exhaust of the aircraft’s engines, or by changes in air over the wings, they are made of billions of liquid droplets or ice crystals suspended in the air. 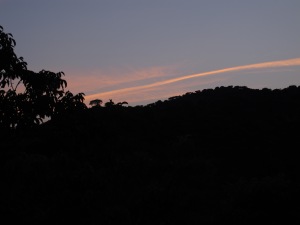 To us, they mean glorious sunsets.

At their purest, the con trails transform into pink lines which look as if they were drawn by a watercolour artist. Often there is a window of only 15-20 minutes when the con trails and the position of the sun combine to beautiful effect. 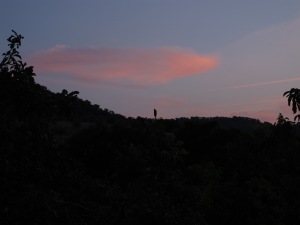 12 thoughts on “Pink lines in the sky”