It seems as if I am always writing about tomatoes, so apologies for that. But here we tend to live and eat by the seasons, so at the moment that means tomatoes. There is a reason that the Spanish eat for breakfast pan con tomate – literally lightly toasted bread [the type of bread varies depending on which part of Spain you are in] rubbed with a raw garlic clove and drizzled with olive oil, then topped with pureed raw tomatoes and a sprinkling of salt. The reason the Spanish eat this for breakfast is that they always have the ingredients.

Despite the glut, there are so many wonderful ways to serve tomatoes that it is never a chore to eat them. This recipe from Delia’s Summer Collection makes enough for us for lunch, and a little leftover to eat the next evening for tapas with perhaps a jar of drained tuna, a handful of roasted maracana almonds, a spoonful of leftover potato salad and a couple of Mercadona’s lovely finger-long pipas [sunflower seed] biscuits.

Pre-heat the oven to 200C/gas 6. Skin the tomatoes by putting into a large bowl, or the washing up bowl. Score a cross in the top of each tomato, and cover with boiling water. Leave for a couple of minutes, then drain. As soon as you can bear to handle them, slip off the skins.
Cut each tomato in half and place each, cut side up] in a greased, shallow roasting tin, and season with salt and pepper. Sprinkle on each half a little garlic and a drizzle of olive oil. Delia suggests topping each tomato half with a fresh basil leaf at this point, but we find that they burn in the oven if we do this so we add them later.
Place the roasting tray in the top half of the oven and roast for 50 minutes to 1 hour until the edges of the tomatoes are slightly blackened. While it is cooking, dip 12 of the large basil leaves in olive oil and set aside. After 40 minutes, take the tray out of the oven and put one olive-dipped basil leaf on top of each tomato half. Return tray to the oven to finish cooking. Remove the tray from the oven and allow the tomatoes to cool.
To serve, place on a large serving dish in one layer. Scatter with fresh basil leaves. Whisk together the oil and balsamic, and drizzle this over the tomatoes. Eat with lots of crusty bread. 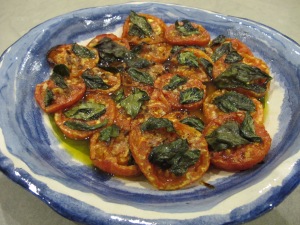 7 thoughts on “More tomatoes and no apologies”