We have a complicated relationship with our fruit trees. We hover over them in the spring, waiting for the first sight of budding fruit as the blossom finishes. We discuss whether to spray or not to spray against the bugs. When we were new here we tried the British allotment trick of hanging old shiny cd’s to trees with fishing twine, in an attempt to deter the birds: Pablo was mystified by this, and the birds took absolutely no notice.

We get upset when the crop is poor, but get irritated when the crop yields a glut so huge we cannot possibly eat it all. We try to be philosophical, the uneaten fruit we leave on the tree is food for the birds after all and we do enjoy birdwatching. But the birds, and other animals, don’t just eat the fruit on the heavily-laden trees. Damn them, they eat the few choice nectarines on our only tree, a young tree that last year at its best yielded six fruit. The plum crumbles, fig cakes, pots of poached peaches, pear pies and all manner of tempting desserts disappear from our imaginations with a ‘pop’ of reality.

And now, something is eating our plums and carefully leaving evidence to prove it. The trail of plum stones down the steps and along the terrace suggests a marten. Last year we had a red fox which cheerfully ate its way through the figs and plums, fastidiously settling itself on a sunbed cushion to eat its feast at night. 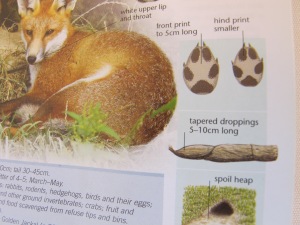 Our certainty that it was a veggie fox was due to two pieces of evidence: D saw it, in the dusky light of evening, skulking beneath the honeysuckle which spreads beneath the fig tree; and fig seeds in the fox poo left on the terrace and the drive [we have a great book, Wild Animals, a DK Pocket Nature guide, which helpfully features a picture of said animal’s poo next to its description].

So I think we can assume that whatever is eating our plums is not a fox, for one there’s no fox poo evidence. Two, we found a half-eaten plum and a stone on top of one of the terrace pillars: not natural territory for a fox. Perhaps it is a stone marten again. We won’t know, unless we see it. Or see some poo.
5 to remember
la relación – relationship
complicado/a – complicated
brillante – shiny
con filosofía – philosophical
la cama de solar – sunbed

4 thoughts on “Something is eating our plums”