There’s something thrifty about the rural Spanish people we live amongst that reminds me of my parents’ generation who grew up in World War Two and learned how to make-do, how to do without, how to make the best of what they’d got. Improvisation: the Andalucians could win prizes at it. Things are not thrown away lightly, everything is hoarded. Large white containers with thin metal handles which once held paint are now used as buckets for animal feed or when collecting veggies. Plastic lids from large food containers are used as bowls to collect eggs. Black agricultural twine is re-used and re-used, substituting for all manner of things from tree ties to hose connectors. 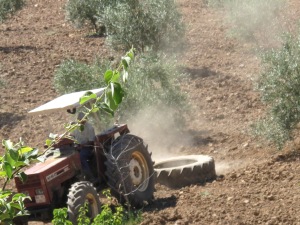 So I shouldn’t have been surprised by the sight of Pablo in our olive grove, at first glance ploughing the field he had ploughed the day before. All olive farmers plough around now to keep the weeds down. Weeds are their enemy: they take water and nutrients from the soil which by rights should go to the olive trees. There is a second reason for ploughing up the summer weeds: fire control. Every landowner has a responsibility to maintain the land against fire risk.
But at second glance Pablo was not ploughing, instead hitched behind his tractor were three huge tractor tyres. At first I thought this was an alternative way of harrowing, a process undertaken after ploughing which flattens the rough earth and breaks up clods of soil to provide a good tilth ready to sow seeds. No, the purpose was more canny, more clever. The land here is a mixture of red sandstone and white limestone, in all the fields can be seen small and large stones in recently ploughed fields. There is never a shortage of rocks around here for building rough stone walls. Last autumn, Pablo and his two sons collected three loads of stones from the same olive grove.

Since then, someone locally has discovered that dragging tractor tyres over the surface of recently-ploughed soil collects the stones inside the tyres. Since spotting Pedro and his tractor, we have seen other farmers locally dragging tractor tyres too. Much easier on the back than collecting the stones by hand.
My father was a farmer. Sadly he never lived to see this house, but I know he would have smiled at the sight of Pablo’s tractor tyres.