I have just finished the most disgusting task: pruning the oleanders [and we have hundreds] to get rid of the residue of dead white fly. We have been plagued this summer with white fly, something we haven’t had here before and which only seems to affect the oleanders.

They target the youngest, tenderest stems and flower buds and leave a sticky shiny coating on everything. After a consultation at the vivero, the garden centre, we bought an insecticide called Confidente.

Our strategy comprised three phases: first, D sprayed every single elfa, not a small task on our slopes. Once the bugs were dead, usually the following day, I pruned every affected branch. 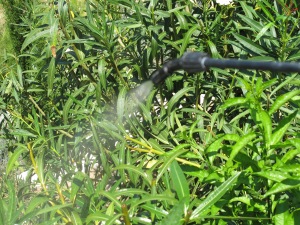 It was the stickiest job I have ever done in the garden, the motivation to finish being a dip in the pool. The final task was to wash over each plant with water containing a small squeeze of washing-up liquid [something my mother did when the roses were attacked by greenfly]. A very laborious process but one which has triumphed.