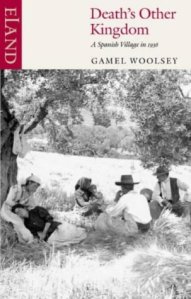 I loved this small book which I read in one day. Written by American writer Gamel Woolsey, member of the Bloomsbury set and married to Spanish specialist Gerald Brenan, Death’s Other Kingdom is an account of life in Spain in 1936 at the beginning of the Civil War.
Málaga goes up in flames and Woolsey observes it, living at Churriana, a few miles inland from the coast and now close to the end of the runway at Málaga airport. The first chapter is an idyllic rendition of life in a Spanish village on a hot day: the pure white walls, the diamond-shaped tiles, the gardener Enrique, his mother Maria, the cook-housekeeper, and her daughter Pilar. It is an idyllic summer day. Woolsey wakes up the next morning and Málaga is burning. She describes the bombs falling – ‘Are they ours?’ ‘Are they the Fascists’?’, the funeral processions, the sad old men and women in dusty black.
This is not a tale of rural Spain, the Brenans were part of the burgeoning ex-pat community in Malaga, pre-Civil War.

If you like this, try:-
‘The Spanish Civil War’ by Helen Graham
‘Spain’ by Jan Morris
‘Spain in Mind’ edited by Alice Leccese Powers

2 thoughts on “Book Review: ‘Death’s Other Kingdom’ by Gamel Woolsey”