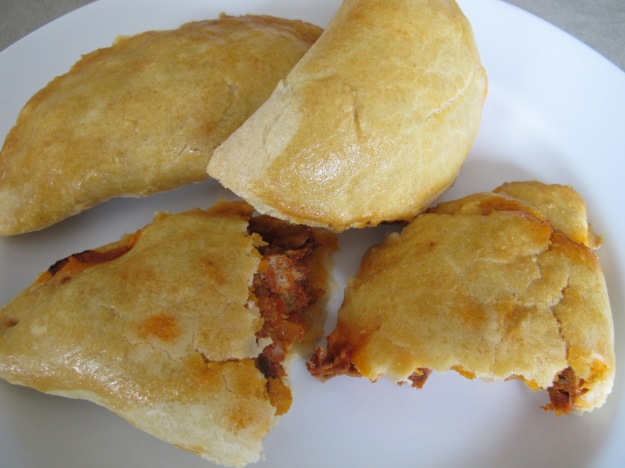 Asturias, in northern Spain, is about as far as you can get on the mainland peninsula from where we are in Andalucía. But we make this pie often, sometimes as a large pie in a fluted flan tin, and sometimes as individual pasties or empanadas. Asturias is known for its pies and pastry, and these empanadas are quite similar to Cornish pasties but with a fish spicy filling. We eat it in winter with simple fried potatoes, or in summer with a tomato salad drizzled with olive oil.
[recipe: ‘Waitrose Food Illustrated’ magazine]
shortcrust pastry
1 beaten egg
2-3 tbsp olive oil
Red pepper, finely chopped
Onion, finely chopped
500 potatoes, peeled and diced small
300ml cider or white wine
2 tbsp tomato puree
1 tbsp chopped parsley
1 tbsp smoked paprika [or ½ dulce, ½ picante]
1 tsp dried thyme
225g fresh or tinned tuna, flaked
Serves 8
Preheat the oven to 190°C/gas 5. Butter a 25cm pie dish or flan tin, or baking tray if you are making individual pies. Chill the pastry in the fridge while making the filling.
Heat the oil in a large frying pan and gently fry the onion, red pepper and potato for 10 minutes until softened. Add the cider, tomato puree, parsley, paprika and thyme, and season. Allow to bubble up, cover loosely and simmer for 8-10 minutes. If it starts to dry out, add a little water. Remove from the heat and fold in the tuna [if using fresh, there is no need to cook it first]. Leave to cool.
Roll out the pastry into two discs [if using a flan tin]. Line the tin with the pastry, letting it flop over the edges a little. Spread the filling in the case and dampen the edges of the pastry. Lay the pastry lid over the top and press the edges together with your fingers to seal. Brush the top with the beaten egg and prick the top.
If making separate pasties, cut smaller circles of pastry, put a small spoonful of filling on one side and flip the other side over to make a crescent shape. Pinch the edges to seal, brush with beaten egg, and bake as above.
Bake for 25-30 minutes until golden. Cool on a wire rack. Serve at room temperature.

This recipe is from Waitrose Food Illustrated magazine.

1 thought on “A tuna pie from Asturias”