Pablo says the walnut trees are 20 days behind where they should be in coming into leaf. He blames the bad winter. The wild flowers are flowering later too. But the late arrival of spring doesn’t seem to have affected the birds. Today we’ve heard a cuckoo, just one in the valley, and any number of woodpeckers [below] drumming.

In the early afternoon, we hear the tell-tale sound of a flock of bee-eaters flying overhead, so high up that they are like pinpricks. Their song, and the bronze and bluey-green colours of their feathers [below], bring a touch of exotic to this late spring valley. 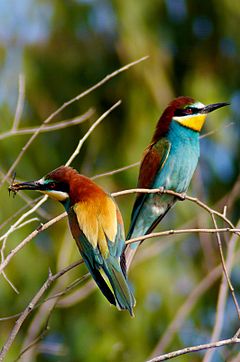