Never mind the price of petrol, the price of olive oil is going up in Spain. Due, apparently to the two consecutive years of drought. This year according to ‘The Independent’ the harvest was down by 60% to 700,000 tons, from 1.3m tons last year. What will we put on our pan for breakfast?

Pan con tomate is the ubiquitous breakfast across Spain. In Andalucía, historically the poorest region of Spain, it is more often the tourists who ask for tomato. The locals prefer simply a drizzle of olive oil and a sprinkle of salt on their tostada. 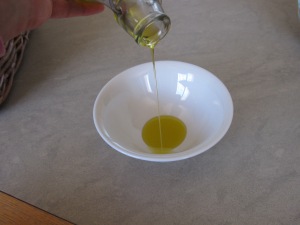 For the ultimate pan con tomate you need mollete, the flat oval-shaped bread buns made in Antequera, 30 miles away from where we live. A perfectly acceptable bread factory version is sold in all the supermarkets, but the best is from a panaderia, a baker. The bread is creamy, close textured. First you split your mollete and toast it, rub it with the raw side of a garlic clove, you drizzle it with olive oil, carefully spread a spoonful of freshly-made chopped tomatoes from edge to edge, and finally sprinkle with salt. It is the food of peasants, and the food of the gods.